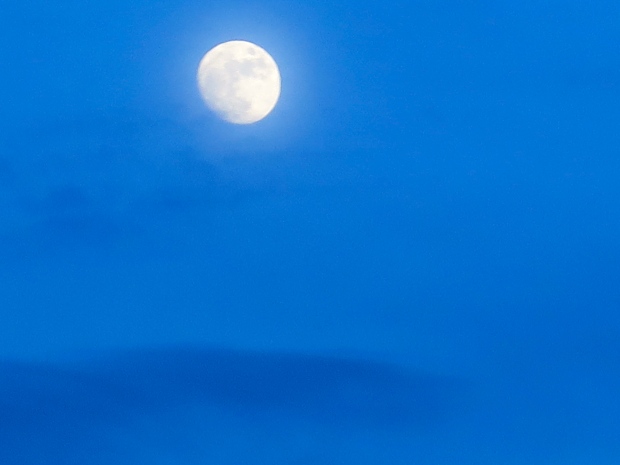 Shooting for the Moon, but not quite focused

I’ve been trying to get a good photo of the moon from my terrace.  As yet unsuccessful, but still trying.  I took a few  shots last night and when I was uploading them today, I realized that in some ways this photo nails what I’ve been feeling and thinking these last several days.  A little further away than I’d like, not as sharp as I’d like, out and visible just a little too early.

Writing, working on the WIP.  I’m getting close to the end, but it still feels very far away.  Further than it actually is.  And I’m antsy about it.  But if I’m honest, I’m also totally and completely excited.  So I’m doing exactly what you aren’t supposed to do, obsessing over my belief that this is the ONE.

I believe it, and I shouldn’t.  It’s good.  I think it’s really good.  I think it’s good enough to happen.  But is it marketable?  Is it marketable enough?  I fucking hope so, but I’m not an agent or a publisher.  And it’s magical realism, a genre that makes most people say “huh?” when I mention it.  Umm, surrealist fiction, sort of.  The conversation only gets more jumbled when the other person asks what it’s like, and the only authors I can think of who are known for magical realism are authors no one of the unwashed and unpublished persuasion should ever compare themselves to.  Gabriel Garcìa Màrquez?  Isabel Allende?  Salman Rushdie?  Paulo Coelho?  Toni Morrison?  Umm, it’s weird.  *I am not trying to suggest my writing is up there with the aforementioned authors.  It’s the style/sub-genre of literary fiction.

I should be cool.  Tattoo all the stats and odds against me across my forehead while I continue writing and face a mirror, and know that this might or might not be the ONE.  In the interest of balancing reality and dreams, I’ve been working on the query letter.  Another shouldn’t.  This one–I shouldn’t hate query letters.  They’re a tool, one of a few used to catch an agent’s eye.  But I do hate them, because I’m not very good at them, and so I figured it would be a good idea to start working on this well in advance of sending any out.  Less pressure.  But really, looking at a blank document and typing “Query” across the top, all I want to say is this:

Pretty sure that would be the ultimate cliche.  Would that change it from cliche to kitsch?  Hmmm.  I’ve been getting some feedback–questions and thoughts–from several excellent, skilled query writers.  I really want to stomp my feet and say well fine, you write it for me. Except a) that isn’t cool, and b) I would be even less happy with what any of them wrote than with what I come up with.  I have no doubts what they came up with would be enticing and fantabulous, but it wouldn’t sound like my “voice,”  or capture the tone in Astonishing.

Queries are always tricky beasts, and I’m having a particularly tough time capturing the right notes in this one.  One thing keeps sticking in my head.  I already tortured my buddy kk whining about this.  I can’t whine to Husband, his response is “just write, you lunatic you.”  OK, he doesn’t actually say that last part, but I can see him thinking it.

Your turn, Fringelings!   A couple of people used the word “poetic” in reference to what I wrote in the query–and I know that I still haven’t hit the right note.  Poetic sounds suspiciously like a polite substitute for “purple.”  For any readers who aren’t writers, “purple prose” is the phrase for overwritten, melodramatic scenes, usually stated with a sneer.  The manuscript is not purple.  Descriptive, but not purple.  I’ve been happy with the feedback I’ve received so far on Astonishing itself, and much of my feeling pleased centers around a few readers using terms like “clear,” and “clarity.”  (And squirm, but that’s a Mrs Fringe thing, I love it when a reader really feels the scene, mwahahaha)  Clarity is important in any writing, but when I’m writing lit fic, it’s probably the biggest compliment I could receive.

I wrote poetry a million years ago, in my angsty teen years.  In my mind I was Anne Sexton.  In reality, I was more like Patti Smith circa 1977 at the end of a show, angry and sweaty and wanting to make. my. fucking. point.

I’m nervous.  Because I do believe Astonishing is The Right One, at the Right Time, written with the Right Words.  God knows I spend hours reading and rereading and taking out the Wrong Words.

Please read my manuscript.  It’s better than my query.

It’s the sound of Mrs Fringe having a quiet day.

In my mind, the scene above is where I am today.  And man, do I need it.  This neverending winter has felt torturous.

But, Spring Break started for Flower Child at 2:35 yesterday afternoon, and Nerd Child is home for another week, so it counts as Spring Break for me, too.  In the spirit of the day, Big Senile Dog decided to start us off right by peeing all over the apartment last night.  In case you were wondering, I don’t call him Senile for no reason.  Occasionally, these days, he forgets the protocol for when and how to void his bladder.  He isn’t the biggest dog, but he is sizable, and has a bladder appropriate for an elephant.

Just reading.  No research, no Facebooking, no crushing myself with literature I’ll never measure up to, just a nice read. What else would one do lying on an empty beach?

At some point this week, I read about Michelle Shocked’s rant in California.  I liked her back in the day.  Didn’t love her, but I had a couple of cassettes with her music.  I wasn’t shocked that she’s now found religion, and embraced a different outlook along with it–to put it mildly.  She isn’t the first, won’t be the last.  There’s a difference though, between someone who changes their views, actions, or even their beliefs, with age, time, and their personal experiences and someone who can’t commit to who they are now or admit who they were way back when.  It made me wonder, who are/where are the young women we can look at and admire now?  Odd, isn’t it, the things that can trigger sadness for lost youth, commitment, and passion?

Imma go put some Patti Smith on the iPod.  I would dance along, but I’m afraid to get Big Senile Dog excited, since I’ve only got three paper towels left.