I don’t know what it is, this inner drive that prompts me to write.  I can and have theorized, but I don’t know.  Clear to me as I try to find my way back to a disciplined routine this week–this “thing” includes whopping doses of masochism and delusion.

On masochism there’s the obvious, rejections.  But honestly, I haven’t faced that many rejections this year because I haven’t sent out all that many submissions or queries.  Yes, yes, I said I would have at least two pieces out on submission at all times this year.  I lied.  Sue me.  Then there’s the masochism of sharing your work with anyone.  Critiquing, being critiqued, or just being read.  I fall behind on official submissions, but I still like to be certain I’m being spanked regularly by sending work to a) people I know it isn’t their thing, and/or b) people who take for-ev-er to respond.  Gives me plenty of time to obsess about how appalled they are by my words, and how they’re never ever going to speak to me again. Then there’s the masochism of connecting with other writers.  For the camaraderie, the understanding and support.  Mmmm hmm.  Sometimes it works that way, sometimes it doesn’t.  And usually when it doesn’t, I know better.  I know better as I’m digging that six foot hole, telling myself to drop the shovel and keep moving.  Don’t respond on that thread, Mrs Fringe, it’s a trap you cannot avoid.  Like, say, trying to explain and defend that nebulous category of literary fiction.  Ridiculous, really.  Who am I to defend the validity of lit fic?  Unpublished, uneducated, my roots are anything but the ivory tower assumed by many when they see the term “literary.”  I sit and sputter and shout at the screen.  But I don’t keep moving and respond anyway.  Why?  Masochism is the only answer.

No it isn’t.  Because now my old friend walks in.  Hello, Delusion!  Walks in and snuggles against me on the couch, plying me with café  con leche and unsweetened iced tea as I write.  Whispering, “You can do this, you have to do this.  A few people like your work.  One manuscript, one agent, one publisher.  That’s all you need, and then a few more will find your words and like them.”

That’s all I need.  So clear, so simple;  so ever-loving subjective I sometimes wonder if my time would be better spent dreaming of lottery numbers.  Or doing laundry.

I may be delusional and masochistic, but  I know we’ve got to have clean bloomers.  I also know that some of the very same people who sneer at lit fic refer to their manuscripts as their babies, being critiqued and sending out queries as sending their children into the world.

Yeah, no.  I put a lot into my writing.  I fall in love with these characters I create, no matter how broken.  I write, read, obsess, polish, rip apart over and over again.  I love my children, obsess over them, hold my breath in fear and pride as they move out into the world.  But I don’t rip them apart or ask others to do so, shrug and move on, dig one out five years later and say hey, if I trim some of the fat off this one I can try again,  think of the older ones as learning experiences.

Delusions or not, this day has to move forward.  I bet if I search all the way at the back of the dresser drawers, I can find a a pair of clean underwear.   Opening the WIP…. 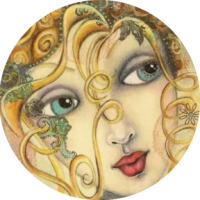