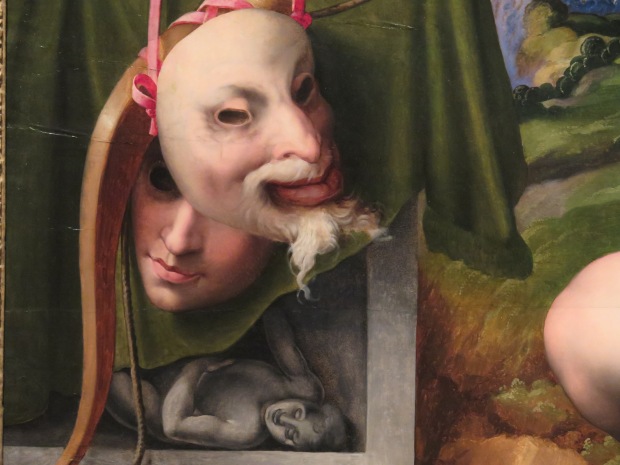 Left side of Venus Kissed by Cupid, Michele Di Jacopo Tosini, 1555 Florence, after design by Michelangelo

To get through the hellscape that is life in America now, I’ve been doing a lot of reading, and I know I’m not alone in this. Nonfiction can let us feel like everything isn’t completely out of control, there are extraordinary people out there to learn about, there’s historic/political precedent (even if not in this country), and fiction has always been and will always be the great escape. Let’s focus on fiction.

What constitutes escape is different for different people, and I’ve been fascinated reading comments on the web on what people are or are not able to swallow in these strange days. Some want the total escape of romance, and/or don’t want anything remotely dark, heavy, or political in front of them. That isn’t me, but it never was, so *shrug*.

I like dark, I like heavy, I like characters who feel realer than real and a message that makes me think–whether that message is about the human condition, climate change, or socioeconomics. It doesn’t have to be straight literary fiction; magical realism is my favorite to read as well as write. Yes, I honestly love Salman Rushdie’s work. It doesn’t always have to be heavy, I’ve long talked about my addiction to Stephen King, think Neil Gaiman is fabulous, last year I enjoyed The Magicians series (a bit too young adult for my taste, though it was marketed as adult fantasy) and yes, way back when I thought the Da Vinci Code was a fun read. I didn’t notice a difference in what I’ve been choosing and enjoying over the past year and a half, still a fairly broad mix in my Nook–other than not being able to plow through the nonfiction political books cover to cover. Small doses.

The other day I saw a tweet from someone saying they couldn’t handle dystopian fiction right now, too close to home. I don’t get it. For me, good dystopians (or near-future, or post-apocalyptic) are exactly what I want to read. Not the Hunger Games type where that special chosen sixteen-year-old saves everyone, but more along the lines of Super Sad True Love Story, by Gary Shteyngart, or American War, by Omar El Akkad. People living through the muck.

I just finished The President is Missing, by Bill Clinton and James Patterson. It was my book club’s pick for the month, not my first choice but I wasn’t opposed, should be a reasonably fun read and I’m usually willing to read anything. I’m not a James Patterson fan, but I read a few of his (back when he wrote his own novels) and the novelty of him teaming up with Bill Clinton was a curiosity worth satisfying. Or not. If it weren’t for the book club obligation, I would have stopped reading. Not because it was poorly written or too slow–though come on, why oh why didn’t an editor knock off the first 50 pages–after that it picked up and kept moving. Not because the President had more than a bit of Gary Stu to him–handsome, brilliant, combat-tested veteran/POW; chose a female VP, Chief of Staff, and FBI director, devoted father, grieving widow, opposed to treason and true humanitarian. But because it was so fucking upsetting to read a contemporary political thriller where the main character is a POTUS who cared about this country and the people in it.  A POTUS who knew Russia isn’t this country’s friend or ally.

Last month the book club choice was Salvage the Bones, by Jessmyn Ward. I loved it, highly recommend, and know I would have loved it five years ago, too. I’m both insanely jealous of her magic with words and grateful for the beauty she’s able to produce from the ugliest of scenarios. But I’m realizing the novels that catch my eye and hold my interest are a little different than what they might have included a few years ago. Those light, fast-paced political thrillers? Right now, for me, more stomach churning than page turning. Anyone else finding their fiction choices are different these days?