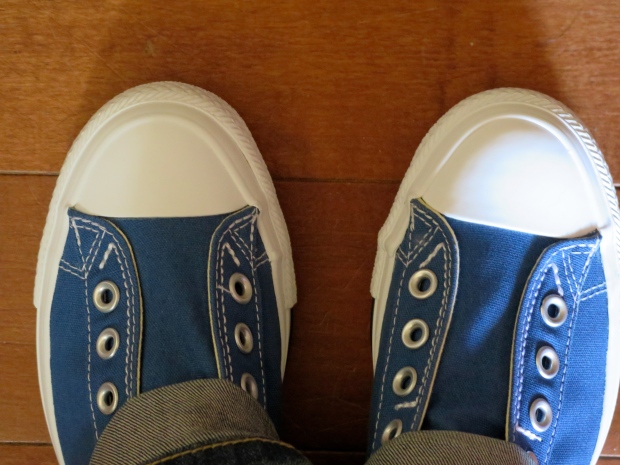 Mine came in the mail, how do you get yours?

Until 5 minutes ago, I didn’t own any sneakers, hadn’t owned any in years. I’m just not a sneaker gal.  They usually require laces and socks, and I’m not a fan of either of those.  Not to mention how closely associated they are with athletic pursuits.  Let me say right now, if you toss a ball to me, my only instinct is to cringe and cover my face.

Still having issues with my back which rule out many of the shoes I already own, and to my great disappointment, it’s still too cool outside for flip-flops.  But…it’s also getting sort of warm for the practical, comfy, fake shearling lined shoes I’ve been wearing.  Hence my online shopping extravaganza. I hoped for gray or white, but no such luck.  You know what they say, beggars-who-are-too-cheap-to-pay-full-price can’t be choosers.

Not too bad, as far as third choice colors go.  I remember my first pair of Pro-Keds, banana yellow.  I know, my mother couldn’t believe it either.  I have a clear memory of sitting in the elementary school gym and squeaking the soles against the inch thick polyurethane glazed floor, trying to tell myself that Susie McSnobby may have new tell-tale threads from a new ear piercing* dangling from her ears, but I had cool sneakers.  Just as good.  Almost as good.  Ok, it’s true, I hated the fucking things from that moment on.  Come to think of it, that may have been the last yellow anything I ever chose.  Converse are still fun, though, and I’ve owned several pairs since then–all suitably white or black.  And now some of my favorite songs from high school are running through my head.  Mostly from The Who.  Maybe I wore sneakers to that concert.

**A long time ago, in an alternate universe where parents never heard of car seats or cabinet locks, and didn’t think twice about a 14 day course of antibiotics because kiddo sneezed twice, ears were pierced with needles and threads.  The needle got pushed through, the thread left behind to keep the hole open until it was “healed” enough to stick an earring in.